It’s been a year of highs for filmmaker Rohena Gera. Her film SIR featuring Tillotama Shome, Vivek Gomber and Geetanjali Kulkarni in lead roles has been on an award-winning spree on the fest circuit, bagging two in quick succession. After becoming the first woman filmmaker to win the Gan Foundation Award for SIR at this year’s Cannes Film Festival, Gera went on to receive the Audience Award at the Cabourg Film Festival.

The Cabourg Film Festival is dedicated to films in the romantic genre and SIR was up against many strong films including Pawil Pawilowski’s Cannes mise en scene award-winner Cold War, Alex Lutz’ Guy, and Love, Greg Berlanti’s Simon. “I was surprised, but delighted when they announced that the audience had voted for SIR as their favourite film. It’s important to me that the film connects with people on a human, emotional level, so this really means the world to me. It was beautiful to see how engaged people were, how much they were rooting for this woman to realise her dreams,” says Gera.

Set in Mumbai, the film revolves around Ratna played by Shome, who works as domestic live-in help for Ashwin (Gomber), a man who hails from a rich family. Although Ashwin seems to have it all, Ratna can sense that he has given up on his dreams and is somewhat lost. On the other hand, Ratna who seems to have nothing is full of hope and works determinedly towards her dream. As these two worlds collide and the two individuals connect, the barriers between them seem only more insurmountable. Gera has added layers of class and women empowerment to bring forth the complexities in their characters, and how they deal with them, finding love and happiness within their different social statuses and constraints.

Calling it an unusual love story and an Indian film in every sense, Gera is humbled to see SIR touch and move audience and critics on the foreign shores. “It questions how we allow ourselves to love who we love. The film touches upon the class dynamics in urban India. There’s a class difference between Ratna and Ashwin, but it is not about a victim and oppressor. It is about love where two people become equal and see each other’s points of view. Their two different worlds clash in one apartment, and how they break the barriers, both physical and social, and come closer,” she says.

Gera only had Shome in mind to play Ratna, but Gomber landed the role after an audition. “I had seen Tillotama in Monsoon Wedding and Qissa, and like always, she’s done full justice to bring forth strength, dignity, optimism, freedom in Ratna’s character. Vivek gave a screen test, and inhabited the character and space around him, working hard to externalise Ashwin’s internal conflicts and be him, quite effortlessly,” she says on casting it right.

Apart from Gera’s SIR, Nandita Das’ Manto also made it to the official selection under the Un-Certain Regard category at Cannes this year, and co-incidentally Shome is aboard both films. Reminiscing her Cannes moments, Shome says, “We were very warmly introduced by the incredibly humble Charles Tesson and the audiences reaction was overwhelming at the moment and it’s echoes are still reverberating in our hearts. I was so happy for both my directors, Rohena and Nandita. And so grateful that they gave me this chance.”

Talking about her SIR experience, Shome adds, “Vivek and I are not given so many chances to play principal characters in films, so we prepared for this one with great hunger. Rohena was supportive, and we attended workshops by Pushpendra Singh. Since we were in most of the scenes of the film, we had to move from one scene to another at a rapid pace and so keeping our focus and being disciplined was key.” The actor has two “very exciting projects” lined up. “I will be working on a film with Anup Singh by the end of this year and another with Madhuja Mukherjee, who was the co-writer of Qissa,” Shome says.

(The article was first published in the Mumbai edition of The Free Press Journal, issue dated 16.07.18) 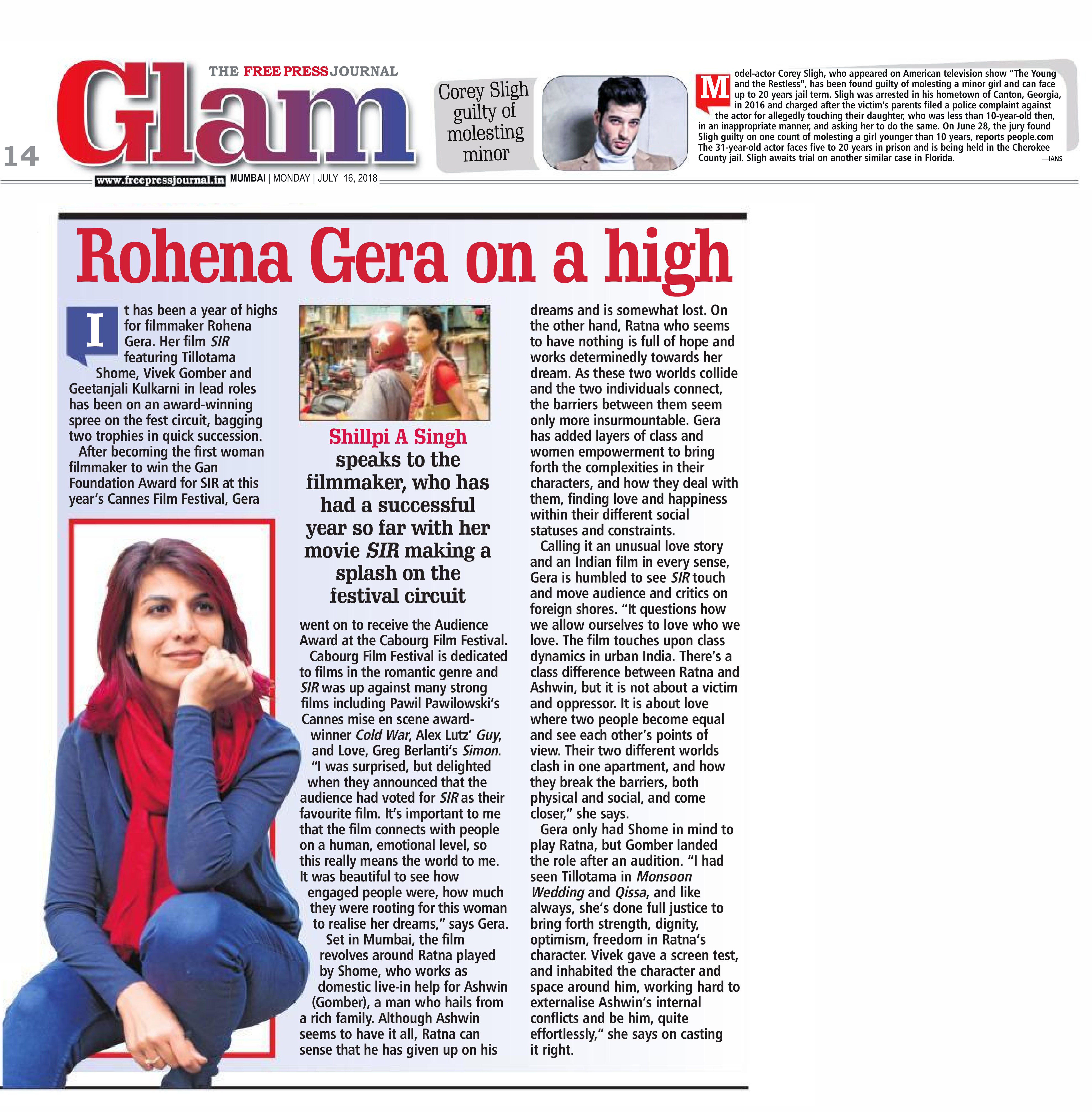